On March 28, The Daily Star hosted its annual award ceremony for O and A Level students with the inspiring tagline â€œ16 years of saluting the nation builders of tomorrowâ€ at the Shaheed Suhrawardy National Indoor Stadium in Dhaka. A staggering 1760 students from both Edexcel and Cambridge curriculums qualified for this year’s ceremony â€“ O Level awardees having a minimum of 6 A’s and A Level awardees attaining a minimum of 3 A’s.

The ceremony commenced with a speech by Mahfuz Anam, Editor and Publisher of The Daily Star. In his speech he recognised that the aspiring youth present at the event are among the best and the brightest in the nation and that they â€œform the core of strength and change that shape Bangladesh.â€ Furthermore, he acknowledged and deeply appreciated the roles of parents and teachers and pointed out values they must strive to maintain such as tolerance, democracy and curiosity. On an ending note, he urged the awardees to push Bangladesh forward and talked of its significance by saying, â€œDo not underestimate the value of serving your country.â€

Following Anam’s inspiring speech, the British High Commissioner to Bangladesh, Robert Winnington Gibson emphasised similar values and added, â€œThere is no substitute for education.â€ Afterward, the Chief Guest of the event, Education Minister Nurul Islam Nahid, came to the stage to express his faith in the students, saying, â€œYou are not just the future leaders of Bangladesh, but the leaders of the world.â€

After the stirring speeches, Shah Habibur Rahman, a student of Manarat International School and College, was invited on the stage as he had attained the highest number of A’s in A Level in the country (5 A*’s and 1 A). Then, Mahin AR Rahman of Mastermind, who received the award for achieving 11 A*s in O Level, got on stage and heartily thanked all those who helped him get to that point.

Oxford International School shook the stage with a dramatic dance performance. Subsequently, the awards for World and Country Highest were distributed. One hundred and eighty students were specially recognised â€“ 52 for achieving the highest scores in the world in different subjects and 128 for outperforming the rest in Bangladesh. Syed Mahbubur Rahman, Managing Director and CEO of BRAC Bank Limited, said that the achievers have made the country proud. Regional director of Pearson Edexcel Asia, Simon Young, congratulated â€œBangladesh’s students who competed on a world stage with success.â€ After that, Professor Sadequr Rahman, School of Science, Monash University Malaysia; Professor M Omar Rahman, Vice-Chancellor of Independent University, Bangladesh (IUB); and Sandeep Gupta, General Manager of Microsoft Mobile Devices and Services, also spoke and motivated the students there.

All the awardees were then called to stage to collect their certificates and medals after two more dance performances by Shaheen School and Bangladesh International Tutorial. Shakib Al Hasan, who recently returned from the ICC Cricket World Cup, gave the closing speech, saying, â€œIf you persist with hard work and faith, you can succeed in anything!â€

Celebration partners of the event were BRAC Bank and Monash University Malaysia. Associate Partners were Edexcel, IUB and Microsoft. 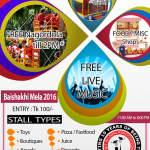 Baishakhi Mela 2016
0 Comment
5th Gold Award Ceremony held on 19th November 2017 at the British High Commissioner’s Residence
0 Comment
B. I.T is proud to have the highest number of Gold Awardees in Bangladesh- five years in a row!
0 Comment